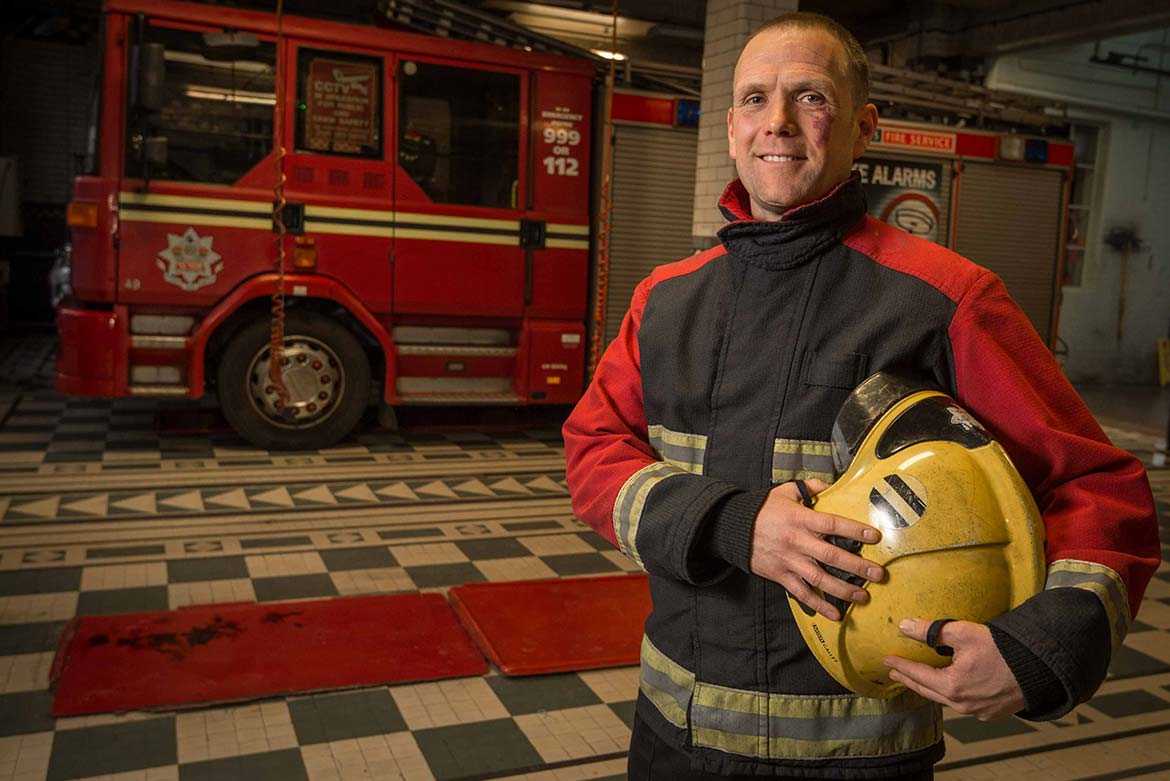 In a scene that could be plucked from a Hollywood movie firefighter Lyndon risked his life to balance on the top rung of a ladder to rescue a young boy dangling by his ear from a tower block window 40 feet above the ground.

Station Commander Wayne Little, of West Midlands Fire Service, said crews were confronted with a “once-in-a-career” mission when they arrived at the scene. A young boy had fallen through an open window at his home, but his head had become stuck in the gap between the pane and the brickwork. It was only the bony bit behind his ear that prevented him from falling to the ground.

“We could see a young child literally hanging on the outside of the tower block with his head wedged in the window,” he told us. The ladder used by firefighters was not high enough to reach the five-year-old, and officers realised there was no time to wait for an aerial platform. So they pitched the ladder against a wall at an angle beyond normal safety limits – and Lyndon stood on the highest rung to pluck the lad to safety. The rescue in Erdington was so terrifying, one onlooker needed to be treated with oxygen for shock.

Lyndon said "It just so happened that I was at the foot of the ladder when it was pitched. I didn't think about it, I just went up. I got to the top of and realised I wasn't quite high enough. So I balanced on the last rung. As a firefighter, you get used to the adrenaline kicking in. It's only later when you think about your day that you realise what has been a particularly challenging job.

“When I got up there he was crying. As I was trying to get him onto my chest he wouldn’t come to me because his head was stuck and he started screaming more.

“At that point I made the decision to get him back through the window.”

Teetering at the top of the ladder, Lyndon managed to open the window and push the boy back inside, where another member of his crew was waiting to help.

Modest Lyndon, who is based at Aston Fire Station, insisted that he is accepting the award on behalf of the whole watch team that took part in the daring rescue.

“It was a team effort as far as I’m concerned,” he said, speaking of the drama for the first time. “I climbed the ladder, I was up there, but without the other crew members it wouldn’t have happened. As soon as we got the message into the station, we all just ran onto the truck as quickly as possible. On our way we discussed what our plans of actions were as a crew. We knew we were going to have to use our longest ladder, but we weren’t sure whether it would reach.”

“I feel guilty in a way that I’ve been the pinnacle,” he added.
We think that Lyndon and his whole watch were quite remarkable and extremely courageous.