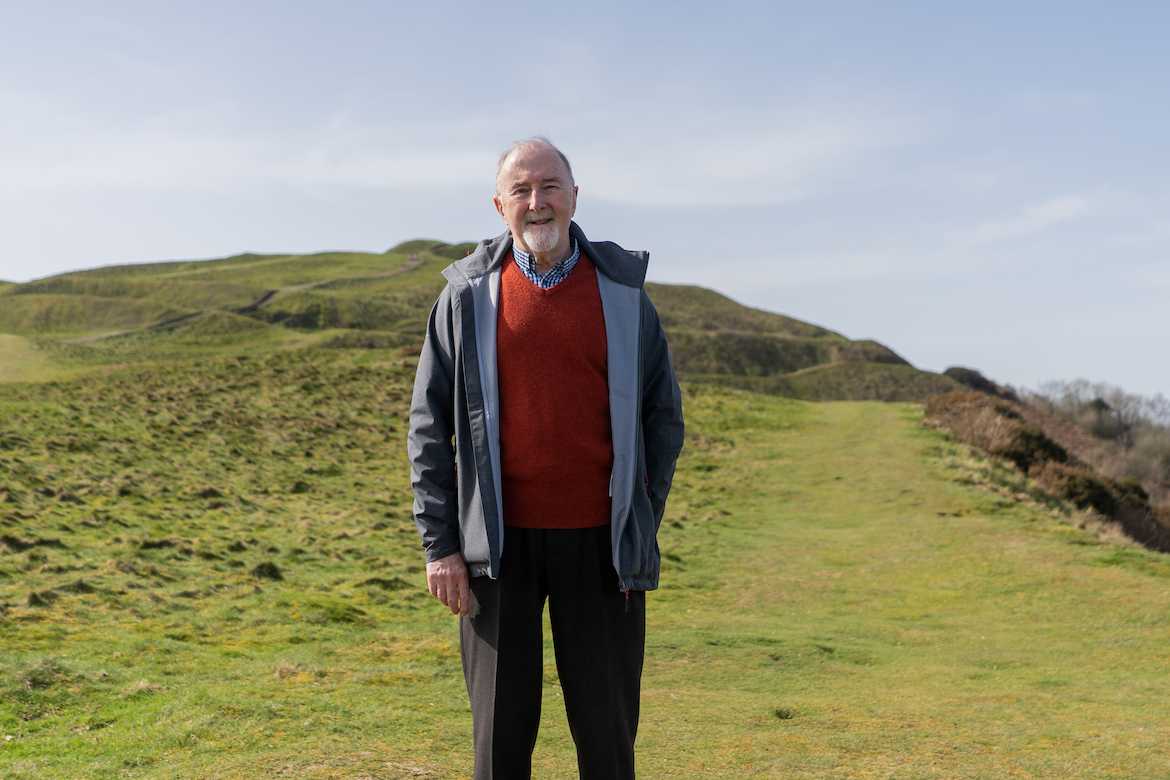 Childline’s longest-serving volunteer, taking thousands of calls from children in danger since the night of the helpline’s launch in 1986.

FOR almost 35 years, Childline volunteer Colin Butler has provided the listening ear that has changed – and even saved – the lives of thousands of young people.

The charity’s longest-serving helpline counsellor was one of the team manning the phones the night Dame Esther Rantzen launched the service in October 1986.

Since then, the retired deputy headteacher has taken an estimated 15,000 calls from children with nowhere else to turn and desperate to talk in confidence about abuse, bullying, mental health problems and other distressing issues.

Colin, 74, says: “This award was a total shock but it is great because it is tremendous recognition of the work all of us volunteers have been doing. It’s quite moving.

“Being a volunteer for Childline is challenging but it is also rewarding. There are times when it can be hard, when you are dealing with a dangerous situation. But we always know that we have done our best.”

Colin’s life-changing decision to volunteer for Childline came about after he saw a newspaper advert looking for people to take calls on the pioneering new helpline.

He says: “I was working in a secondary school in London and in charge of the pastoral work. I’d come across some very nasty cases of abuse and what was evident to me was children had nowhere to go.

“The NSPCC were there, the police were there, but it takes a lot of courage for a child to walk in and say what is happening to them. When I saw that Childline were planning a free helpline, I knew that would work and replied immediately.”

On the opening night, Colin and the other volunteers had no idea what to expect, but an estimated 50,000 calls were attempted, jamming the BBC switchboard and proving the free and confidential service was very much needed.

“It has not quietened down since,” he says. “Speaking to the callers was quite an insight for me as a teacher.

“When I came across a situation where a student was in trouble because they had shown some temper, I started to approach it in a different way.

“I’d try to work out what might be going on for them to behave like that rather than taking a strictly disciplinarian approach.”

Colin worked the Sunday shift at the charity’s London headquarters for a number of years, changing to Friday nights after he switched careers into computing and later the charity sector.

In 2003 he became the charity’s first national head of volunteering, travelling the length of the UK on a voluntary basis to recruit, train and support the service’s vital army of helpers.

He continued in his role until the NSPCC took Childline under its wing  in 2006 and they were able to dedicate a full-time staff member to the job.

The merger with the national children’s charity secured the helpline’s future, and Colin was involved in the team that helped to broker the partnership.

He transferred to the Birmingham office around 15 years ago after he retired to Malvern with his wife Gillian and became chair of Malvern and Three Counties Friends of Childline, devoting his time to fundraising and giving talks about the service.

While the volunteer has played a pivotal role in the course of thousands of young lives by providing an understanding voice at a time of distress, it is rare that he finds out how their stories end.

But one of Colin’s most memorable calls had an unexpectedly happy ending after an underage girl threatened to take an overdose because she was pregnant and terrified of her parents’ reaction.

After the grandfather-of-one helped her, she rang back a year later to say she had given birth to a baby boy and named him Colin. “It’s very special,” he says.

Prior to the pandemic, Colin continued to do a shift at the Birmingham office once a week, but health conditions meant it was no longer safe to go there once lockdown started.

Instead, he has found new ways to help young people in need and his fellow volunteers, by interviewing for new counsellors, sitting on the ChildLine development board and joining the virtual volunteers’ team, who support children who contact them by email.

He said: “In 1986 it was landlines only and children would call from home when parents weren’t about, a friend’s house or a phone box.

“Now it is much easier for them to reach us and they call on a mobile phone from the park, on the bus and walking to school. The majority are now choosing to go online and our virtual hub was busier than any of the 12 regional bases during the last year.”

It is not just the way children communicate with the service that has changed over the decades, but also the types of worries Colin finds himself addressing.

He says: “Children have a lot more issues these days. When we launched, a lot of the contacts were around abuse and I’d hear from a child who was suicidal or self-harming about once a month.

“Now virtually every contact involves anxiety, mental health, suicide or self-harm. It is a really disturbing trend and it doesn’t help that children’s mental health services have been cut year after year. The waiting lists are very long.

“The pandemic has been so difficult for young people, particularly if there are issues at home like domestic violence and drinking. They are trapped in that situation.

“Lots of them are worried about their education. They hear politicians talking about how they need to catch up and they worry they will be disadvantaged in future. It makes me mad, as a former educationalist.”

Efforts to preserve the mental wellbeing of volunteers have also come a long way since 1986, when Colin would drive home processing the distressing discussions he’d had with callers.

“Now we have a system where we debrief after every shift and that is absolutely essential to put it behind you,” he said.

“If you take a particularly distressing contact, you can take a break, discuss it with a supervisor and get it off your chest before the next call. If you don’t, you are not doing the next child any favours because you are not in the right frame of mind to listen to them.”

After dedicating  almost half his life to ChildLine, Colin has no plans to step down. He said: “I went into teaching because I have always liked working with children.

“I get tremendous satisfaction from those situations where a youngster is able to get something off their chest and maybe find a solution or see a way forward.

“Most of all, there are occasions where we actually save lives, where children have been suicidal and in the process of going through with that.

“To be able to talk to them and find out what is important in their lives, to make them less likely to harm themselves, is very rewarding.

“Even just saving one of them would have made the last 35 years’ worth it.”